My trip to Ecuador in Spring 2016 was to visit Ryan who had moved down in October 2015 to continue his work with Me to We.   The trip was 10 days total. We went from the capital city of Quito to the mountain resort town of Baños to a rain-forest lodge along the Napo river. 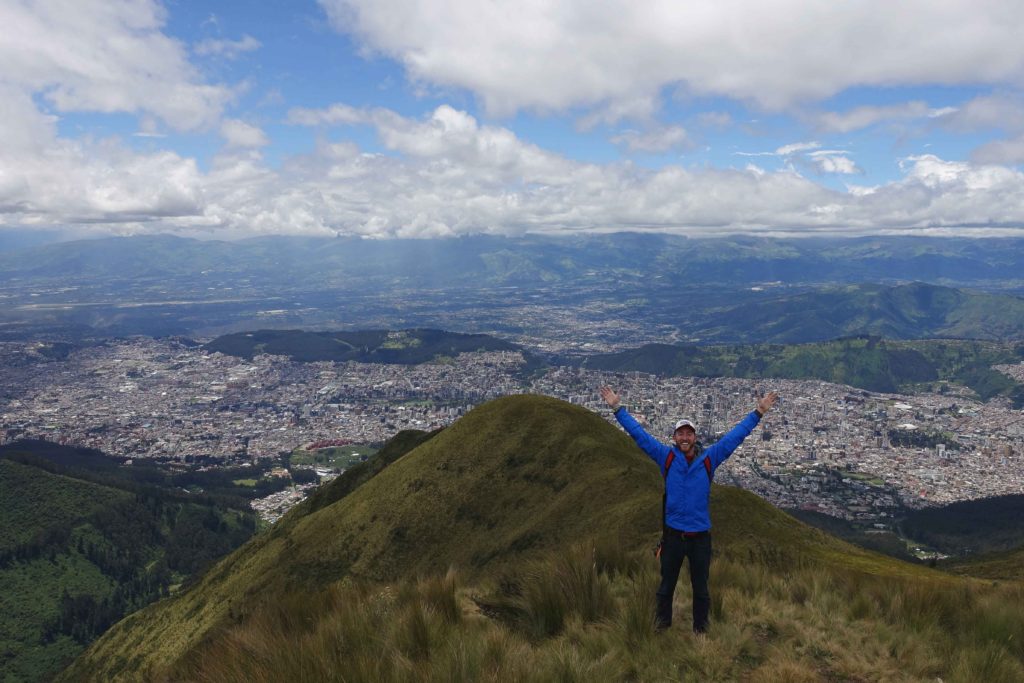 Squad: Myself, Ryan and Dan

Had an amazing 11 days exploring Ecuador with these two. Now it's back to the real world tomorrow #Ecuador #bouttodropafiremixtape

Some of the gear I traveled with for this trip

Bags are packed & my OOO message is set. Wheels up 7am tomorrow ✌🏻️🔜✈️🇨🇴

Our first night in the city we went to the Historic City Center and had dinner at a cafe called Cafe Dios No Muere.  The three story building had cozy seating and a unique dishes.  The cafe has a blend of Louisiana Cajun and local Ecuadorian Cuisine.

The first thing we did the morning after arrival was the Todo Lodo!  An Ecuadorian version of a Tough Mudder.  The main twist is you do it at 9,000+ feet elevation.  For me this meant feeling like death for the duration of the run & obstacles.  Overall I had a great time and would recommend it!

Ecuadorean tough mudder at 9000 feet without adjusting to the altitude. Why not? #todolodo #vamos

The rest of the day consisted of me passed out on the couch dealing with the symptoms of altitude sickness & exhaustion.   After 8+ hours of naps I was able to pull myself together and we ended up going out in Quito that night.

In the morning we got a tour of Centro Historical in Quito guided by Ryan’s Spanish teacher.  As the first Unesco World Heritage Site the area contains multiple 17th century churches with ornate details inside you have to see to believe. (also no pictures allowed so you cant see them online)

We ended the tour with some brews atop the Hotel San Francisco de Quito.  The Hotel has a 360 view of the surrounding buildings and El Panecillo y Virgen de Quito.

We packed our bags in our spacious Chevy Spark and made the 3 hour drive to Baños.

Baños means bathroom in Spanish but in no way is the town a shit hole.  The town is named after the multiple hot springs fueled by the Tungurahua volcano which the town sits at the foot of.   The mountains surrounding the town have beautiful waterfalls that are illuminated at night.

Baños, Ecuador is an incredible place. Not sure there are many other places in the world where you can white water raft, bungee jump and go canyoning for $100 & stay in a hostel for $8 a night #Baños #Ecuador

Adventure sports is one of the main attractions for the town.   The first day we rafted the class 3-4 rapids on the Rio Pastaza.   As hard as our river guide tried to get us to spill out we managed to stay in the boat the whole time!

Our River guide said we could jump this rock if we had enough speed. We were not going fast enough…. #Baños #Ecuador #whitewaterrafting

After lunch and ice cream we traveled to a stream on the side of the road.   We suited up in full body wet-suits and prepared for canyoning.  This was one of the favorite things I did during the trip.   You are forced to challenge yourself and take the plunge into pools of fresh cold steam water!

Take me back to canyoning down a stream to the Pastaza River. Probably the coolest things I did in Ecuador. #Baños #Ecuador #Canyoning

This night we headed out on the town and explored.  We checked out the Stray Dog Brewpub for craft beers & american style pub food.

For a whopping $20 you can harness into a swing on the side of the bride crossing the Pastaza river and jump.  Worth all 2,000 pennies.

Video of the jump!

#tbt to the best $20 I spent in Ecuador last year. Where should I go for my next big trip? #ecuador #banosecuador

The final adventure task was paragliding .  We drove up to the top of a hill overlooking Huambaló, Ecuador and the Tungurahua volcano.  Unfortunately the weather was too cloudy and once things cleared up there was no wind.  We didn’t end up going but the view of the town and landscape was worth it.

That night we went all out and explored all of what the Banos nightlife had to offer on a Wednesday evening.   Make sure to check out the flaming shot from Leprechaun Bar (47-54 seconds in the video below).  It was a dozy.

Baños pre bridge jump, overlooking Tungurahua while waiting to paraglide and a quick taste of going out in Baños 🔥🍹 #JoeExplores pic.twitter.com/rgex2gFF5d

Our next stop was Minga Lodge along the Napo River in the Mondana region of Ecuador.

Boat ride on the Napo river to the @metowe Minga Lodge. Learning about the communities @freethechildren works with in the Amazon #Ecuador #hyperlapse

The incredible sunset view from the top of a dining platform at the lodge.

Minga Lodge is where Me to WE hosts visitors seeing first hand the work WE Villages does in the region.  Minga is a Kichwa (tribal language) word that basically means “coming together for a greater good”.  WE Villages partners with local communities to help improve quality of life through five sustainable pillars; Education, Water, Healthcare, Food and Opportunity.

This day was all about seeing the pillars in action.  In the morning we spent time in a village helping with a build project at a school.  We spent a couple hours hauling dirt from the riverbank to the build site for a bathroom/well spot.   We also spent time playing soccer with the school kids.

Back at the lodge Ryan walked through how they make chocolate.  From coca bean -> roasting -> grinding -> adding sugar& milk to make the final product..

In the afternoon we spent time with the mamas who create jewelry and other goods that are sold by Me to We.  The jewelry made is sold around the world and the proceeds go directly back into supporting the programs We Villages works with.

At night at the lodge we went out for a hike to get to know the local creatures.

On our way back to Quito we stopped in Misahualli which is know for the local monkeys who love munching on sugar cane.  They also like stealing cameras and phones so be careful!

We also stopped by the Jumandi Caverns which was a cool way to spend an hour and $5.  The caves have a stream running through and you have the opportunity to swim and climb around.

The evening of the 16th we were about to head out to dinner when things started to get weird 10 stories up in Ryan’s flat.  Everything started moving and we realized we were in an earthquake.  The earthquake was one of the strongest in years. The damage in the city was minimal but in the coastal towns there was serious damage and loss of life.

Once we were back in Quito we took Sunday to explore the city on mopeds.  Sunday was the optimal day for going out on bikes because traffic is not an issue.  For me it was my first time ever riding a motorized bike.  After dropping it once on the road next to the rental shop I felt comfortable enough to go out and hit 70 on the highways.

Rented mopeds and explored Quito today. Here is the view from the top of El Panecillo next to Virgen de Quito #Ecuador #Quito

We went all around the city and stopped atop El Panecillo and went to the east side of Quito, Cumbayá for a meal near the town square.

For Dinner we went back to Centro Historical and at at Cafe Mosaico which sits atop a hill and overlooks the town.

On Monday Ryan was working so Dan and I took the TeleferiQo gonadal up the Pichincha Volcano and checked out the view of city and the surrounding mountains.

After coming back down TeleferiQo we went shopping at Mercado Artesanal for some alpaca fur blankets and fake Ray-Bans.

For dinner we headed back to Centro Historical for the last supper at Bandido Brewing which has great beer & pizza.

Did you enjoy this write up?   Check out other trip recaps and Subscribe to get monthly updates on my adventures.

Keeping my mom sane by documenting what I do on my travels.  I know you’re reading this mom, and yes, I will call you back soon 🙂